Evil has hidden themselves beyond an impenetrable storm, hording adventure from those who seek it.
Post Reply
1 post • Page 1 of 1 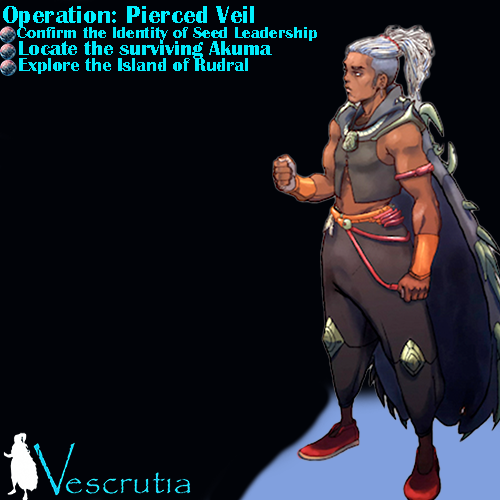 Azlan and The Veil

Surrounded by dense magnetism and powerful storms, The islands of Rudrul were forced to grow in isolation from the rest of the world. Evolving without the influence of the other continents came with its challenges, but the islands persevered and are now home to rare species of life. The dense electromagnetic field often referred to as, "The Veil", surrounds the scattered islands and has shrouded them in mystery for eons. Those who were lucky enough to cross the veil, "The Akuma", were graced with hypnotic visuals, created as light from the suns, Xelphis and Kyrin bounced off the field of concentrated ions.

The archipelago was held together by a single massive tree given the name "Azlan", by the Akuma who were the first to cross The Veil. It was an otherworldly organism- whose intricate network of roots not only burrowed far enough to anchor Azlan to the seafloor, they also branched out from its trunk like tentacles to absorb other ambient forms of nutrients.

They were thick and strong enough to support Rudral's albeit smaller/remote chain of islets suspended within the clouds above the surface. A phenomenon that had never been seen on Vescrutian soil.

The web of roots that cluttered the sky were near indistinguishable from its branches- as both were tightly coiled around the other, and stretched for miles about the complex of islands. Serving as natural bridges between Rudral's scattered territories.

Thick roots burrowed deep into the ocean below and kept the tree alive, thriving off the micro nutrient rich volcanic soil that lie beneath the planet's mantle. Fed a rich supply of nutrients- the mighty Azlan dwarfed many of the neighboring mountains, but did not support the massive weight of the floating islets on its own. Several thousand years ago, it was the massive magnetic presence of The Veil that originally shifted the polarity of Rudral's initial landmass, causing colossal chunks of territory to levitate into air. Once every year the magnetic strength of The Veil weakens and without the roots of the Azlan tree, the islets would plummet to the surface like meteors, as many of them had done before.


Azlan produce a wide variety of fruit and berries, but only after seasons of prolonged darkness, which is a rare occurence on Vescrutia, but even more so on the Rudral. The sunlight absorbed by Veil illuminated the island for five perpetual months. The unlit hours were significantly shorter, ranging anywhere from three weeks to five weeks. During which most native fauna revert to a hibernative state while Azlan's fallen leaves fertilize the soils, developing surplus crops of fruit and flora to sustain the population until the following harvest.

The sheer size of Azlan was a marvel to behold, its regal aura was only magnified by the height of its crown. The canopy was decorated in leaves, varying in color across a vast spectrum of visible light. Every part of the tree played a vital role on its survival, the leaves were highly efficient at absorbing light. Shedding their top coat until they're left with a dark black coat. The tension in the leaves make a whistling sound as they rub against one another filling the spring air with a soothing him.


The Akuma
For a while those who held the resources held the power;but, that way of life was brief. Its hard to keep people under the grip of oppression when the bulk of the population had access to Naten. After the end of the first turn power was everyone's birthright. Its arguable that this rapid evolution spun the balance into disorder. What was yours one min, could very easily become someone elses the next. This sort of materialistic and possessive ideology had become all consuming on vescrutia, making the survivability of large civilizations bleak. Empires, kingdoms, cities, they all rose and fell like the passing of 'another planet,' through the days sky. Tyranny overthrown by rebellion, only to become the tyranny it fought so hard to behead. Rare was the sight of a border where might wasn’t right.

Yet nuzzled safely in the forest , the akuma seemed to have been spared the adoption of this fruitless ideology. Cooperation came natural to the matriarchal society,with bronze and beauty in tow. Their lands were rich with natural resources-spearheading them to the next economic super power within their region.

Though tragically their fate turned grim, as the closest neighbor to their border was a dying and mad king. A deranged man who had gained sudden power in his land by filling his people's minds with lies and false prophets. An all too common sight on vescrutia. It was both the king's arrogance and the people’s gullible nature that led to their demise. A recent expedition into an unknown region of the planet had brought a terrible degenerative skin disease onto his people, the likes of which afflicted them like a divine order.

Doomed for extinction and drowning in weight of his ever collapsing empire of lies, he sought to buy himself time from his shame, no matter how brief it was. He began spreading a rumor that the Akuma’s anthem could save his people by producing a cure. This lie spread without pause inside their desperate minds, driving them to unspeakable horrors against the akuma. Rather than risk subjecting the lands to destruction,the akuma fled their own homes by sea, something the stone kings' people held great fear of due to dogmatic rhetoric that was preached within their borders.

An enigmatic group of cultists lurk in the shadows of the unexplored islands and exiting the island without the help of an Akuma is impossible. Once a player has crossed the veil, they be stuck there until Alice can retrieve them.
Everything posted by this account is official property of ©Vescrutia2018, no reproduction, or reposting of this content identical to or closely resembling is allowed.
Top
Post Reply
1 post • Page 1 of 1

Return to “Islands of Rudral”