To think he'd wined up in a place like this. So far from home. The weight of his steps crushed the while snow beneath him yet the ice, porcelain in its being withstood the thud of his boots. The winds carried on them a sort of musky smell that he did not think would exist in a place that time had seemed to have forgotten. The Frozen Waste. It even more amazing than the book for told. To think here of all places might rest something of Denkou linage. If he wasn't so excited he might actually be burdened by the cold. It was already of little consequence normally, for the Denkou to not feel the sting of intense colds or heats that might normally unravel other humans. Their body's however hold true to the word resilient, as their perilous journeys across the face of Vescrutia have gifted them resistances unlike others who exist in only one climate. Besides, he had something else brewing inside him that would not allow him to be troubled by this environment. The fervently swelling desire to remove Mios from the throne; His throne.

He whispered not even taking a moment of pause. In gloved hands he held a scroll. It's details were that of a map custom made by a cartographer that was referred to him by a Professor of the Conservatory. It was the reason he traveled here after all. In a village not far from here there lived a man that actually studied various nomadic tribes who recognized Dazuma's houses' symbol on his blade. At first the ragged prince wasn't sure of he should confide in such a man. however the man did not recognize it as a Ri'ore symbol instead for its fundamental roots. The Emerald Eyes Cobra. a creature that has no set home. It is said to be the only serpent amongst it kind that can survive in any environment. Even in sub below weather. He told Dazuma of a town that revered these creatures in the Frozen Waste and that Dazuma as a wielder of the symbol should make his way there. It was this man that offered to make a map for him free of charge. He'd only make Dazuma promise to share with him his stories of the trip as cost for his services.

So much was riding on the words of a possibly senile old man. However, acknowledging the fact that he was on some cosmic journey of discovery in partial whim of a vision he had where he conversed with Vescrutia herself would also make him senile as well. He was fully dressed for the journey. Despite his hides natural resistance against the cold he took no chances.

He donned a Dark green fur reminiscent of his should be status as Emerald King. He figured it was safe to have a bit of pride here in the middle of nowhere far beyond the diligent eyes of his brothers watch dogs. His scarf as always on his person, and heirloom of his mothers that would never part from his being. It was nestled beneath the fur underneath a small metal plating that acted as a form of armor. Under it fur from a species of forest bear who mad their home to in the lucid south. Known as the only species to readily make their way to the Frozen waste to mate during these frosty times of year. And even with this as he traveled during the day he was sure to have Lucio steadily absorb sunlight to get him through the night time. He left no t uncrossed and no i undotted. He was determined to see this through to the bitter end...or the glorious beginning.

Re: A Buried Future

His hands were always strapped with Fulgear. Taking but a moment of pause he unraveled the map. It was pretty expansive which really spoke to the talent of Neovian cartographers. The Frozen waste were massive. The map didn't even cover half of the area in its totality but the target of his focus was clear enough. The map even marked a few of the neighboring creatures, in particular the food sources and the predators that hunted them. What he was looking for now though was a mountain pass. Said to be home to a fearsome breed of mountain sabers that are a few notches beneath the Apex of this place, which also meant they were pretty dangerous and in rare occasions they even hunted in packs. Dazuma hoped for Rai's sake this was not to be one of those occasions.

Attending to the map, he was looking for some sort of distinguishing land mark to let him know where he was in this wasteland. It was littered with debris that one might not even be able to tell from whereat it came. In the distance he could see some species of hare and other smaller four legged creatures roaming about, no doubt in search of food.

Or something of the sort. Looking towards the direction they where running from he imagined also that a mountain pass might have some form of vegetation that they may or may not eat. He checked his map there was a structure that resembled some form of a spire. He looked around and after a few turn found just the one. The hares seemed to be running east of that place and the mountain pass was also marked due that direction

He exclaimed. Pass that point he would be exposed to the town that could very well hold the buried secrets of the Denkou's truth; His truth. He would begin to move forward again. Keeping his balance amidst the various slippery surfaces. It wasn't as dry of a cold as he thought it to be. Which in his opinion was a little problematic. Wet cold fur might not provide the effect he was looking for. The winds carried empty hollowed chills that would end up freezing the fur. He pressed on. Moments would pass and he'd be hit with a mighty gust of air that almost knocked him off balance. His eyes were blocks by the wild scarf caught in the winds and he through his arm up to shield his face further. When he finally gathered himself he would be looking out into the horizon. His eyes widend in awe of what he now was witnessing. 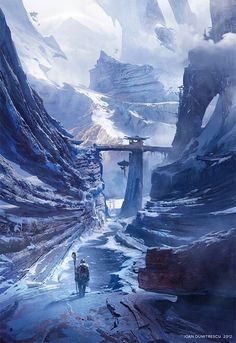 Re: A Buried Future

As the mountain pass came into full view over the horizon Dazuma stood in absolute awe of it's snowy magnificence. The fur of his wear ruffled with the passing a a few chilling gales. They whipped up little snow clouds that blanketed themselves on the litany of broken rock formations. There wasn't much life here, it mirrored the tundra. They must have some habitats around here that allowed them to avoid the harness of the cold. The trail seemed pretty straight forward arching upward into a step but steady path, littered with little formations that from what he could tell were like...stairs?

"This road has been traveled"

How long though had anyone touched this place? It seemed unabated by outside influences...like no one had even seen it in ages. However, that spoke nothing of why it was used to begin with. It could have been a road less traveled and those who did walk upon it's steps were doing so in the hopes of reaching something. There was nowhere to go but up! Doing just that he started his was on his way. As he traveled he began to see numerous clusters of what seemed to be pieces of sharp stone. One in particular stood out . He leaned towards it to notice there was aos a small stone tab that had been scribbled on. It was terribly withered and diffe ult to interpret. I observed the chatartues and the unique scrapping that had accentuated ends.

"Who would have thought uncles boring lectures on calligraphy importance to history would actually pay off."

His uncle was a very wise man. He had been one of the leads of the Ri'ore's diplomatic counsel for over 67 ears. He understood over 138 different languages across Vescrutia and had taught Dazuma 83 of them. How to read, write and speak each one so as to increase his academic prowess.

"I remember the one lecture he gave that was actually interesting"

Dazuma scoffed, he was being coy. Side effects of the cold. He was actually fascinated with the concept of language and how it acts as the bridge between literal worlds.

"Language is much like the starry skies above us. Each stat is it's own language and the many ways we express that language are much like the very constellations above."

He would smile taking his right hand an brushing the stone off the mini shrine like structure,

"Communities are forged when the connectivity of communication blossoms like well grown fruit."

He observed the writings the more he looked the more familiar it became. He placed his hand inquisitively on his chin. He began to dig deep into his mind. He traced the crudely crafted markings. The roughness of the stone made him remember a tale his Auntie Sha'Ren once told him. The tale of the Veragin. A lost tribe of Cryo mages who once rivaled the Denkou. Much about them was lost with the extinction of their people but she held a text that contained hand written children's tales.

"Now how the dickens did that ballad go?"

He began to sway his head back and forth letting small spurts of whistling happen. The more he whistled the more the story came to mind

"The icy gleam of wands that sing dah dah dah"

The breeze began to pick up.

"The frigid smile of the frozen Queen dah dah dah"

As the words continue to serenade the empty expanse around him Dazuma would notice a slight twinge in his naten. He merely dismissed this as joy having not had much time to take a breather and spat a tune

"Frosty glare of the hands unseen"

In that moment his naten would erupt from his hands. He knew this light, it was "Favor of Rai" magic. A special light magic that he was able to use thanks to his birthright. It was rare to for it to ignite on its on. As the soft green light began to brighten the face of the stone.

As the light etched itself in the crevices of the crude stone it began to thicken and gel almost becoming a liquid like substance. Little by little Dazuma was witnessing the power "restore" the stone tablets. Time and the weather had been eating away at this place... could this truly have been a place the Denkou once walked? At first he took this place for the pilgrimage of the Veragin. However after seeing this...he could feel the essence of ancient denkou forces at work here. His soul was literally trickling into this place. He tried to dwindle the light of Rai down some. The brightness could attract unwanted attention. The process seemed slow though and would take some time for the light to restore the stone.

Return to “The Frozen Wastes”